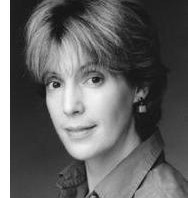 It is very unlikely that you will not know at least one piece by Cecilia McDowall – even if it is the very popular Comic Song from the ABRSM grade 4 book! She isn’t a flute player, but her father, Harold Clarke, was. He was principal flute at the Royal Opera House, and professor of flute at Trinity College of Music. So it is inevitable that Cecilia would write music for us, and write it well. She is completely woven into the flute fabric in the UK, with works on exam lists and commissions ranging from contemporary solo pieces to music for large flute ensembles. 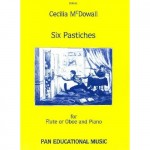 The Comic Song actually comes from one of my favourite of her albums for emerging students. Six Pastiches for flute and piano is a book of little gems, each one having a quirky take on their individual title. For example, there is a disjointed “Hornpipe”, in which the tune appears almost but not quite as you would expect; the minor key “Comic Song” full of clown-like pathos; and a truly slapstick “Music Hall.” Easily accessible but full of scope for the imaginative pupil to explore the unusual, these are invaluable as both teaching and performing resources.

Three Concert Studies develops technique by the back-door – the “Chromatic Waltz” for chromatic scales, “Tongue in Cheek” for articulation patterns and “Spaces” for intervals. In a popular harmonic language, these are all very appealing. Soundtracks, another album of intermediate pieces, is worth having for the sumptuous Russian Encounter alone. The wonderful melody and off-beat accompaniment make this a winner!

At the other end of the spectrum, The Moon Dances, commissioned by Susan Milan, represents a serious challenge. Here McDowall uses contemporary techniques to evoke the colors with which to illustrate the “intense imagery of the Spanish poetry” – the inspiration behind these contrasting dances. The whole of the second movement, “Black with Shadows and Wolves”, involves the flute being played into the piano, resulting in a pervading veil of ghostly harmonics. Rhythmic complexity and drive characterize the outer movements “Paper Sea” and “Silver Coins and The Red Star Trembles”.

McDowall is greatly influenced by her Scottish background. Piper’s Dream draws inspiration from Celtic folk music, with the flute at times reflecting the sound of the bagpipes! Essentially a fantasy, the improvisatory style of writing creates a dream-like quality that eventually fades away into the mist. 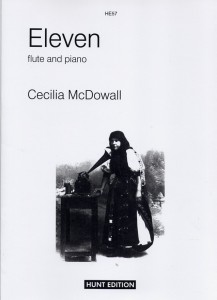 Another of her important works for flute and piano is Eleven, illustrating her ability to create a sound world distinctly foreign to the instruments used. It was written at the time of the troubles in Kosovo. She writes: “I became obsessed with what happens to a culture when it is dispersed due to war. ‘Eleven’ means ‘alive’ in Hungarian, and I dedicated it to all those in danger of losing their cultural identity, in the hope that they can keep their cultural ‘voice’ alive.” The mesmerising nature of the indigenous religious music of the region is graphically illustrated here, and the depiction of suffering is intense. The piano part is written to reinforce the sound of the cimbalom, and the improvisatory nature of the folk song writing for the flute adds to the passion. I think that this is one of her best pieces and is impossible not to be moved by the strength and depth of feeling underlying every nuance.

Her latest project is Crossing the Bridge, an exciting new work for flute orchestra, commissioned by Margaret Lowe for the National Flute Orchestra. A whole array of flutes feature – piccolo, 4 flutes in C, 2 alto flutes, bass flute and optional contra alto and contra bass flute. As she explains:

“The structure of the work is like that of a bridge. The short middle movement, ‘London Bridge’, spans the divide by taking the last phrase of ‘Mostar’ as its opening, exploring the darker tones of the lower instruments, and the first bar of ‘Brooklyn Bridge’ as its close. In this middle movement I took the old English song, London Bridge Is Falling Down, and played around with it, sharing it between the instruments, until it ‘falls down’. The opening movement, ‘Mostar’, refers to the old single arch stone bridge in Mostar, Bosnia and Herzegovina, which became such a symbol of peace and hope in the late 1990s. In the outer sections of this movement the flutes explore the characteristic ‘fall’ at the end of the phrase which is quite a feature of some middle European music. The central section is lively and has a whirling, folk-dance feel to it. At the time Brooklyn Bridge was built (1883) it was one of the longest suspension bridges in the world. It connects Manhattan with Brooklyn across the East River, always busy with traffic, and has a powerful presence on the New York skyline. The third movement of Crossing the Bridge is one of perpetual motion, opening with a bright, staccato texture, and is in the shape of a palindrome or arch. (Appropriate, I hope, for a piece about bridges!) It is restless and energetic, driving full speed to its final cut off.”

If you add to all of this Seven Impressions for piccolo and piano, and Winter Music for wind quintet, you start to understand how important the flute is in the life of Cecilia McDowall. Her father has a lot to answer for and we are in his debt!