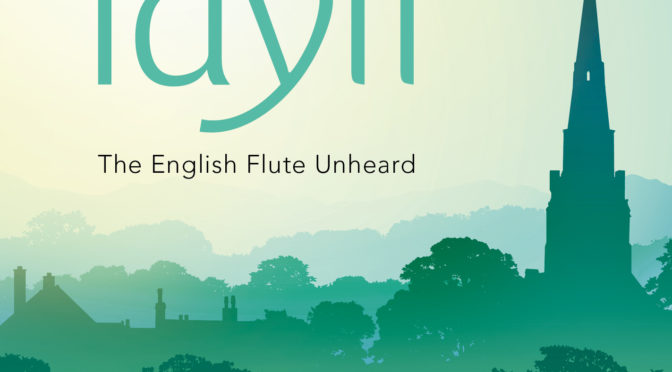 An Introduction to the Repertoire

When my pianist Oliver Davies and I started researching suitable repertoire to include on our album “Idyll”, we had no idea how much of interest we would find across a huge range of styles and eras. The only proviso was that the composers had a connection with the Royal College of Music, either as a student/professor or both. As we were both alumna (Oliver was also a professor for over forty years as well as founder and head of the Department of Portraits and Performance History) it was an obvious choice. Our producer Mike Purton also urged us if possible to find works that had never been recorded before for commercial release. This we achieved almost totally – one movement of the Robin Milford Sonata had been recorded with strings in a different arrangement, some of the Armstrong Gibbs Suite had been recorded by Richard Adeney many years before, and finally perhaps most excitingly, the only existing recording of the Sonata by Stanley Bate was a version only available on subscription and with the purchase of the sheet music in Paris – by Marcel Moyse accompanied by his son Louis. Rarefied company to say the least! Sadly this is one of the works that although still in copyright is no longer in print – more research is needed to see if it could be reissued at some point.

It turned out that only three of the nine works we ended up choosing to record were still in print. Oliver’s in-depth knowledge of repertoire of all kinds across the 20th century and access to the library at the RCM as well as his own collections meant we were unearthing some wonderful pieces which had lapsed into almost complete obscurity. It was a fantastic project to breathe life back into works that very few flautists had ever played, certainly in the recent past. Now the CD has been released, it has been very pleasing that reviews have also highlighted the quality of the repertoire that we have discovered. These are works that have been unjustly neglected and are more than worthy of performance.

Here then I’ll introduce you to those works which are available from the publisher’s archives, printed on demand – though almost entirely unknown.

The Sonata in C major by Robin Milford is published by Thames. Written in 1944 it is a charming work, full of invention and character that could have only come from an English composer of that period. Milford studied with Vaughan Williams, and his illustrious teacher said of him – “If I wanted to show the intelligent foreigner something that could only have come out of England, I would show him some of the work of Milford”. Perhaps a slightly un-PC turn of phrase for the 21st century, but the sentiment is nonetheless very strong! Robin Milford was a fascinating, though ultimately tragic figure in the music industry. He was the son of Humphrey Milford, founder of the Oxford University Press. He became very well-known as a composer of songs, many of which are still popular. His musical style is very definitely “English pastoral” – he refused to be swayed by European modernism, and ultimately this became his downfall, as his writing was seen to be more and more anachronistic for the period. He suffered from depression for most of his life – and the untimely death of his young son Barnaby at the age of just five must have been almost too much to bear. Eventually he took his own life in 1959, after having received the cruellest of requests from the OUP – he was required to collect all the unsold copies of his manuscripts from their warehouse. Not the happiest of personal lives then, but his music radiates sunshine, albeit tinged with melancholy at moments. The Sonata in C is in three movements, the first full of sparkling motifs, a gloriously melodic and singing second movement (this also exists as a standalone work called Interlude,  arranged for flute and strings).

The final movement might give the illusion of being like a jig, but it actually demands a much more measured approach to fully appreciate the details of the harmonies and invention. In Milford’s obituary one critic noted “his emotional range was limited”, though one rather more percipient observer wrote “his music is fresh – and it will come fresh to those of a future age”. I hope that age is now! Probably the most well-known of the composers that we chose was C. Armstrong Gibbs. The “C” stands for Cecil, though he hated the name and variously switched between just using his two surnames or adding the initial. He enjoyed the patronage of Adrian Boult who encouraged him to attend the Royal College of Music where he studied with Vaughan Williams, later joining him as a fellow composition professor. Like Milford he wrote a huge number of songs, as well as some very popular instrumental works. The most famous is probably “Dusk”, for piano or small orchestra, and proved extremely well-loved. It was even requested to be played at the future Queen Elizabeth the Second’s 18th birthday party at Buckingham Palace.

Again like Milford, Armstrong Gibbs did not embrace the sweep of modernism and new composition styles emerging from Europe. His Suite in A  (published Oxford University Press) dating from 1956 seems wildly out of touch with other works from that era, but it has a craft and approachability all its own. Written in five movements – Prelude, Minuet, Sarabande, Gavotte and Quick Dance it blends the baroque feeling of the Suite form with popular music, and even a hint of the Last Night of the Proms in the final movement!

It is not a technically demanding work, but even so there are many details and nuances within all the movements that demand serious thought. Appoggiaturas abound, ready to trap the unwary! The Sarabande is a truly gorgeous little movement – just a couple of minutes but full of stately beauty and sombre reflection – a lot of emotional content for something that seems superficially straightforward. This work was a lot of fun to put together, and at around 13 minutes it’s a nice solid recital piece that deserves to be heard more often!

The Suite in Three Movements by Cyril Bradley Rootham was written in 1921 – one of the two works dedicated to Louis Fleury on the CD. I believe this is truly a masterpiece in miniature and without doubt one of my favourite works on the recording. Rootham was a highly regarded teacher – among his pupils were Arthur Bliss and Armstrong Gibbs (though he was for organ, not composition)

Published by Chester it is not a long work at only nine minutes, but it is possessed of some truly wonderful writing for the flute and piano. The style is rather modal, shot through with hints of Holst and Vaughan Williams. Again the overall appearance may be of simplicity, but to capture the true essence one has to delve deeper. The opening Passacaglia is particularly haunting, and to bring out the varying textures of each iteration of the theme demands much concentration in  balance between the instruments in their different registers. I was really taken by the last section in which Rootham splits the theme between flute and piano – it has the feeling of wisps of smoke blowing on the wind, and to seamlessly blend the line together takes real thought and refined duo playing. The Saraband is fantastically expressive with swooping lines from the flute and great interplay between the instruments. The Jig which follows is surprisingly complex – when one just looks at the flute part alone, it’s hard to see what the fuss is all about – but this illustrates exactly how important it is to analyse what’s going on underneath as well – the piano part has a minefield of details: changing harmony, different voicing of chords, subtle changes of direction that give the whole a really satisfying feeling in just about a 90-second movement! I really loved working on this piece.

The title track “Idyll” was written by Richard Henry Walthew in 1907, and dedicated to the pre-eminent English flautist of the day Eli Hudson. It was first performed by Albert Fransella on September 5th of that year at the Henry Wood Promenade Concerts.

There was a real personal connection with this work for me – Walthew’s great-grandson David is the former principal clarinet of the Band of the Scots Guards, where I have been principal flute for over twenty years, though soon to be retiring! Oliver has been a friend of the Walthew family for many years, and his knowledge of the work’s existence led us to finding it in the British Library. The original publishers, Stainer & Bell, was co-founded by Richard Walthew. The work is still in copyright though out of print, but dialogue is underway to potentially bring the work back to a wider audience. It was recently chosen to be broadcast on Classic FM alongside one of the movements from the Armstrong Gibbs Suite – I was very proud that it was included in their playlist, and hope that this will persuade the publishers that it will be worth bringing back to life in score form as well as on the recording. I would love other flautists to get to know all these pieces and consider programming them in their own recitals.

The basis for this article was originally published in Pan Magazine (Journal of the British Flute Society) in March 2018, and permission for this version has been kindly given by Carla Rees, editor of the magazine.