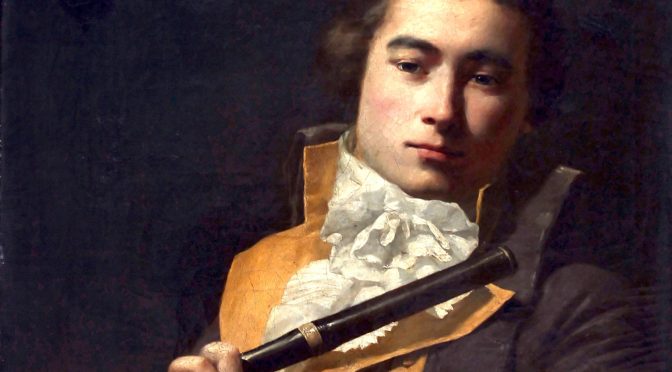 There are plenty of alternatives to the Mozart flute concertos, and the Classical period has a wonderful variety of composers who wrote very well for the instrument. The manageable string parts mean that some are ideal to perform with a school orchestra, whilst others are very challenging indeed!

The earlier Classical period is rich in flute concertos, most of which are technically less demanding that those of Mozart. Christoph Willibald Glück’s Flute Concerto in G major is an old favourite, and one of the best. The writing has a simple texture but there is still plenty for a flute player to enjoy. You will need to be agile, as the Allegro non molto leaps around, and have a sustained sound to carry the long phrases in the Adagio. The final Allegro comodo is delightfully uncomplicated. The piano reduction works very well here so it also works well as a recital piece.

Equally delightful but much less familiar is the Flute Concerto in D major by Rossler-Rosetti, or another in the same key by Anton Fils. These are both very tuneful and provide just the right level of technical stretch to interest a budding soloist. We are lucky enough to have a flute concerto by Joseph Haydn which is brilliant – even if it has now also been attributed to Leopold Hoffman! Another work in D major, it starts with a lovely Allegro moderato which will challenge your low note projection as well as your articulation. The beautiful Adagio has the flute melody floating above the orchestra and the closing Allegro molto alternates semiquavers and triplets to great affect. This is a wonderful concerto – whoever wrote it!

More robust is the D major Flute Concerto by Friedrich Schwindel which has a greater note range and more complex flute writing. A bold opening Allegro gives way to a soft A major Adagio melody which lies in the upper part of the register. An ebullient Rondo brings the work to a happy conclusion. This is fun to play and will engage both the audience and the players: Although CPE Bach isn’t strictly speaking a Classical period composer, he wrote perhaps the most difficult concertos of the 18th century. Try the Flute Concerto in G major if you like your music powerful, demanding and compelling. The first movement Allegro di molto is a workout, with long phrases demanding excellent breath control, tonguing and finger dexterity. The atmospheric slow movement is more Baroque in outlook with a gentle lyricism, but the closing Presto is perhaps even more challenging than the first movement. Extended passages of large leaps, all articulated, will test even the best players. The D minor Flute Concerto is also high-powered with mighty outer movements and a slow Andante of wonderful tenderness. These are standout virtuoso concertos that will bring the house down. A more familiar figure is Francois Devienne who wrote a number of concertos for us. Flute Concerto No 2 in D major is one that will challenge your finger technique considerably. Devienne approached composition purely from the standpoint of player, so the accompaniment is merely a support for the soloist. This consists of the customary mix of scales, arpeggios and sequences that are characteristic of his writing. The overall effect is pleasing though, and the change of key to D minor for the Adagio adds extra interest. This concerto is full of notes, and will test your flute playing skills considerably.

Composers of the late Classical period were writing for a more advanced instrument, so their concertos are more technically difficult. If you want something completely off the beaten track that doubles as a workout, the August Eberhard Müller Flute Concerto in E minor might be just the piece for you:

The writing is darker and more dramatic throughout with a first movement that changes frequently from minor to major. The second movement Adagio uses the full compass of the flute to weave its melodic line, and Müller uses an unusual theme and variations structure as a finale. This sparkles despite the predominant minor key, and you will need very good articulation to fully convey the character. It’s a good piece, one worth exploring.

All of these fine works will please both you and your audience. Don’t forget the cadenzas though – some editions include them, but it’s actually much for fun to write your own!