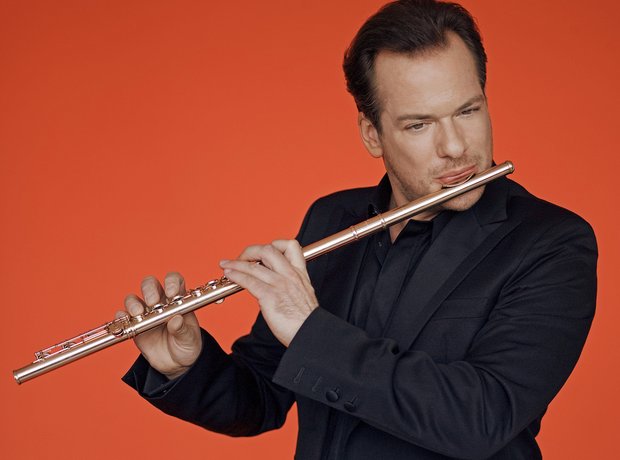 To press or not to press? That is the question for many flute players, especially in the early stages of learning, and there are a few different opinions on this which I would like to discuss and offer my own thoughts.

When we are first taught the flute, we are told to blow across the embouchure hole. To make a sound on the flute, the air needs to divide at the outer edge, where air goes in and above the flute, creating a vibration. To control pitch, dynamic and intonation, our lips need to be flexible. So, ideally, the flute’s lip-plate should be placed below the bottom lip where the roots of the teeth are. This varies, however, due to people having different thicknesses of lips. Those with thicker lips often need to place the flute a little higher up on their lower lip than those with thinner lips, since a thick lower lip would cover too much of the flute’s embouchure hole, either making the sound quite small and flat, or non-existent.

When we press the flute too much into the chin, something similar occurs. Firstly, the blowing angle is lowered due to the lower lip covering the embouchure hole more, making the pitch flatter. Secondly, the lower lip is receiving more pressure and is restricted in movement, making it less flexible. Thirdly, the teeth themselves are getting a metal (or wooden) plate jammed into them, which can have a non-desirable effect of tooth damage. Look at how free Emmanuel Pahud’s lips are.

In order to apply more pressure onto the chin, one can push the flute towards you with the left hand index finger (the finger that balances the flute, together with the right thumb). If you are working hard with your left hand, overusing muscles, this can only have detrimental effects on the sound, setting up bad habits of tension and potentially causing pain issues down the arm or shoulder. When I try to apply more pressure, I instantly feel stuck in position, with no way out!

So why do people suggest it?

I’ve seen students who have stability issues – their flutes are wobbling all over the place and the sound, especially in articulated passages isn’t stable. This can be due to a lack of pressure, but also because of being unbalanced. As stated in Trevor Wye’s books, there are three balance points when holding the flute: the left index finger, just above the knuckle joint; the right thumb, which supports the weight of the other end of the flute; and the chin itself. If one can hold the flute without it wobbling with just the right thumb and left index finger, one has found good balance, and so over-using finger muscles to grip the flute, or pressing a lot on the chin becomes unnecessary. This is especially noticeable when coordinating finger movements for C-D (2nd and 3rd octave), or any combination where the left thumb leaves the flute. If the flute is balanced, there shouldn’t be any need to press more.

Some teachers, including one very well-known one, suggest applying more pressure, to help with articulation – so the sound is constant and consistent and not likely to go in too many directions when changing fingers. This is not a bad idea – the sound does indeed need to be stable – but is there another way? Presumably, one wants the air to go down a bit more when tonguing, since the air tends to go a bit higher when adding the tongue. So, instead of pressing more, one could simply aim the air a bit lower and find the angle of the air that gives the best quality of tone. In this way, one can control the pitch better, so tonguing in loud and soft passages is possible.

I think this brings up another issue, which is more general in nature. That is, can we find a better solution to technical problems, rather than trying to fix the issue head on (known as “end-gaining” – see a previous blog about this). Can we find the means whereby that will indirectly fix the issue, rather than “muscling” our way through, which inevitably sets up bad habits, tension, discomfort and poor technique. I can think of many examples of this, such as “support”, holding one’s breath and others, which involve overusing muscles and I may write about these another time.

So, in summary, if someone says “press more”, work out if you do in fact need to, or whether you could get the result they want another way, but where your lips are free and flexible. Don’t be afraid to ask “Why?”. If someone can explain the reasoning behind it and you don’t feel discomfort, then go with it, but just know there is always another way.

RS 2012 Scale
Finding resonance on the flute
Scales: An Incomplete Look at What Every Flutist Should Know