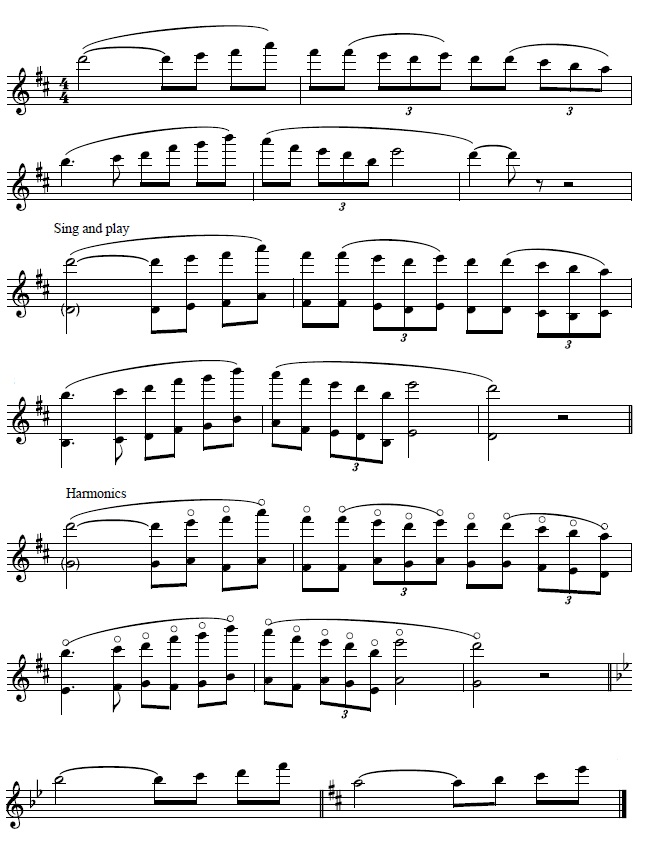 Following on from my Taffanel blog, here is a practice guide for another great French work: Chaminade’s Concertino. This piece is played a lot, but quite often with some important details overlooked. As I say to my students, “don’t be an overlooker”! I will also give some tips for practising some of the tricky passages.

Achieving a true legato is not just about having an even airstream. Indeed, sometimes, one needs to shape the phrases carefully with precision from the lips and jaw so that notes don’t pop out, especially notes that fall on weak beats or ones that act as pick-ups.

For example, a recurring phrase is the one that begins the piece. I have circled in blue where the phrase is often disturbed because of the interval jump to a higher note. The top note, despite being on a weak beat, is often bumped by a push of air. The phrase, for me, leads to the first note in the following bar (F sharp in bar 4; A in bar 6).

To counter this tendency to blow harder for a higher note, try lifting the airstream by moving the jaw forward as you do a slight diminuendo. You will also need to increase the airspeed as you go up, but don’t simply blow more. I like to think of the Holy Trinity of air: speed, direction and amount/volume. Each component has an effect and should be practised separately to gain mastery of the airstream. In a diminuendo to a higher note, you are increasing airspeed and blowing up (direction), but the dynamic (volume of air) should be slightly less.

Practice the following exercise for all the intervals in the piece. The diminuendi and crescendi can be exaggerated at first, but in context should be small. The crescendi help the phrase move forward to the next bar, so after lightening the top note, you can then come back to a fuller sound on the lower note.

Low notes can be equally guilty of disrupting the legato line. Examples of where this occurs are circled in red below:

Be careful not to bump these pickup notes, but think of phrasing forward with a slight crescendo to the next beat. Make things simpler by practising the phrasing on just one note, then with a simple scale down. This takes away the awkward jump down. After practising that a few times, you can try it again as written, keeping in mind what you just practised.

In the second bar of the opening melody, we have some repeated notes with lines on them, which often sound quite blurred. Practice doing a slight diminuendo on each note, without cutting the notes to achieve good repeated notes. Think of each note as a small bell that has a good clear start that diminishes, but continues to ring. This requires good flexibility in the jaw. For more detail on repeated note practice, you can check out my book: Mastering the Flute with William Bennett.

The main theme appears in many different keys. You could practice it in every key using various exercises to help improve resonance. Here is a suggestion using harmonics and singing and playing:

There are several tricky spots, and slow practice is needed. You can also break it up and change the rhythms, alternating between fast and slow, such as below:

In addition, you can do what is known as “chunking”, by practising a small chunk and then moving along one note, which effectively irons out any problem areas. After practising 3-note chunks, you can extend to 4 notes per chunk.

Here are some examples of commonly overlooked small details, which make quite a big difference to the character that Chaminade wants.

1. Tempi. The section below – marked Più animato, agitato – is often played without any animation or agitation! It’s a chance for giving the music a change of pace and enlivening the character, but if played at a similar tempo and in the same character as the beginning it can sound indulgent and sluggish. I have also put some diminuendi in to show the stress pattern. Think of them as small appoggiatura, which give the music a pleading and expressive quality. Letter D is often a place where the stress is misplaced because of the large intervals.

2. Rallentando. Chaminade marks very clearly where she wants the music to slow down, so make sure it doesn’t slow down too soon. Otherwise, it will just grind to a halt.

4. Markings. Observe all markings carefully, especially accents and tenutos. Notice how, even though the phrase heads towards the B, the B itself is not accented. It requires a different attack.

I hope this gives you some ideas. Let me know in the comments what piece you’d like me to blog about next time. Happy Fluting!