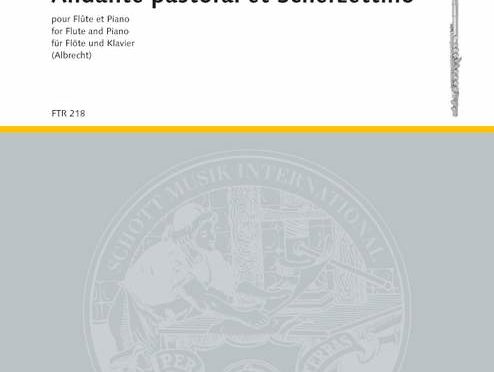 Taffanel’s Andante Pastoral et Scherzettino is a gem in the French flute repertoire and one of my favourites. Indeed, I played this piece for my entrance exam at the Royal Academy of Music and I fortunately got in! It’s a piece full of technical challenges, written as a test piece for the concours at the Paris Conservatoire, but equally abundant with beautiful melodies and characters. I would like to give you some practice tips and exercises for this piece, in the hope that technique and music can become one and the same thing and you learn to love this piece as much as I do, if you don’t already!

Looking at the opening statement in the flute, we can see that the basic outline (“skeleton”) is a G minor chord. Play the skeleton and aim for an even colour and quality of tone. Think about the direction of your airstream. To keep the tone even, you will need to aim the air slightly lower as you descend to the low D. MKeep the sound open and full – try singing an “aah” and play at the same time. Feel how this helps create more resonance. Then fill in the gaps with all the notes and try to keep the quality of the sound you found when practising just the skeleton.

For bars 6-7, practice the following harmonics to help find the correct air speed and direction. Start by finding the harmonics without changing the dynamic. You will need to increase the air speed and angle the air up by moving the jaw forwards. With the diminuendo, you will need to do exactly the same thing as before, but the air will need to be lifted more to avoid getting flat as you get softer. Finally, add the notes back from the melody. Experiment with changing the colour after reaching the low D when the harmony changes to the dominant chord.

The following melody in bars 8-11 can be simplified as below:

Feel the lilting metre of 9/8, with a light pick-up and then slight stress on the first beat of the bar, followed by a released second beat (“I LOVE you”). Practice adding the high note into the skeleton by lifting the airstream and not blowing harder, which will help the high note float out and not disrupt the metre or phrasing. Then play as written.

Notice how the first note is a pick-up or up-beat into the next bar, so try to give the Bb a “soft attack”, i.e. not accented or heavily tongued You may want to experiment with how to start the note, perhaps without the tongue. If this melody was sung, it would perhaps start with a vowel “ooh”, rather than a consonant “tu”.

Add some more notes in, but be careful of the stress. It is tempting to blow down from Bb to D because it is going down, but D should be softer since it is a weak beat, which means the airstream needs to be lifted (jaw forward). Similarly, in bar 15, be careful of not stressing the 3rd quaver of each beat. Doing this also helps give a sighing or pleading quality to the melody, adding to the melancholic character.

Enjoy the different harmonies of the Pastoral melody, changing the colour where the character changes, e.g. a happier colour in bar 17, and a more mysterious colour in bars 43-44.

For me, the character of this Pastoral is very similar to a siciliano, which are often characterised by lilting dotted rhythms, in compound time, often in a minor key, and quite slow. Famous Siciliano movements that are also in G minor and share similar characteristics include Bach’s Flute Sonata in Eb (Siciliano) and Fauré’s Sicilienne. Both of these pieces are quite melancholic, with flowing semiquaver accompaniments, which give the impression of rivers and nostalgia.

There are moments of joy and surprise (particularly with the appearance of sf in bars 24, 25 30, and 31), providing a nice contrast. Use a change of colour and a different vibrato speed/depth to help show the contrasts.

As with the majority of French test pieces (notably Enescu’s Cantabile et Presto, Gaubert’s Nocturne & Allegro Scherzando) the first movement ends on a soft high note, in this case a top G. A good way to practice this is to use “reverse harmonics”, where you finger the top note as normal, but then split the note down on purpose so you hear the lower partials, which are often referred to as “ghost tones”. Try keeping the dynamic soft and play the following:

You can also practice the ending in the style of Moyse’s De La Sonorité, gradually lifting the airstream further and further the higher you go:

This is an articulation tour de force! But the wonderful thing about Taffanel’s writing is that there is always a strong musical intention behind everything – it’s not simply showing off. The pairing of these two movements works so well, since it’s like Taffanel wants to shake off that melancholic mood and just have fun. There is plenty of syncopation and lively staccato articulation.

To get the character suitably playful, the sound needs to be lively without being forced and that is achieved by a healthy, unobstructed airstream. It is important to keep the jaw and shoulders released of tension and allow the airstream through. As soon as tension and force is used, the intonation and sound suffer and the character is lost. A good way to practice this is without the tongue and play all staccato notes as if saying “ha-ha-ha” or “ff-ff-ff”, feeling where that comes from in the body. A light bouncing of the air helps the staccato notes to sparkle. Be careful not to over-use or hold the stomach muscles doing this. Instead, keep them free and flexible in their movement.

For lively accents and sfs, try thinking of a very quick diminuendo instead of a big attack on the note. Aim for charm and playfulness, rather than strength.

The middle poco meno mosso section provides a nice melodic contrast to the rhythmic sections either side of it. It should only be a touch slower, if at all. The contrast is achieved by a change of attack (accents are points of expression) and change of colour.

As in the Andante Pastoral, finding the skeleton to the music without all the extra notes helps one find where the phrases lead to and which notes are more important. It is very easy to get caught up in all the notes, which ends up making it sound heavy. Lightening weak beats and less important notes and having a clear direction of the phrases helps the music sing in the playful way it was written.