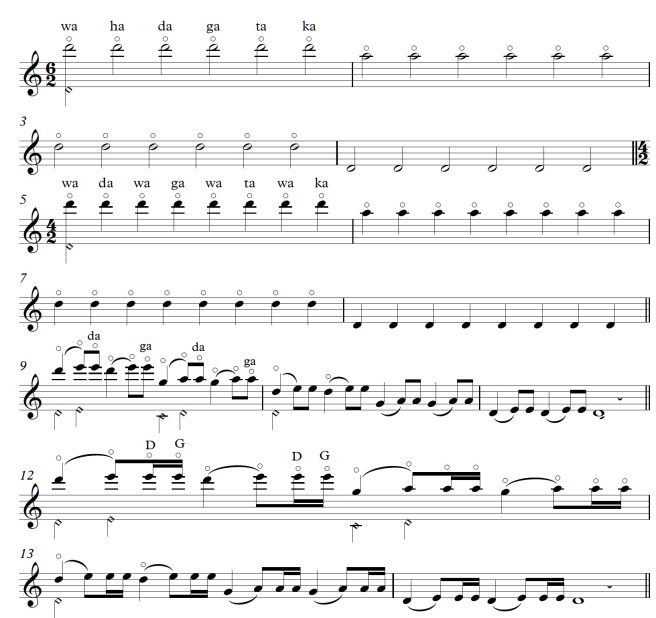 Here are some of my thoughts on tonguing, with some exercises and information about the tongue itself.

The first step is to get the tongued notes as clear and full as one does without the tongue. It’s all about the airstream and not letting the tongue affect how the air travels out of the body through the lips. Release tension in the jaw and use the slightest touch of the tongue. The tongue is very big and it can be very easy for us to overwork it if we try to use too much of it.

When I was very young, I was taught that the K or G was a reflex of the T or D, which at first helped with speed, but the quality of the K was never as good as the T.  We should practice both consonants as equal strokes like a good string player who practices their up and down bow in equal measure. I had a private masterclass with some of Wibb’s other students given by great violinist and teacher David Takeno, where we worked on the Bach Chaconne and Mozart G major violin concerto. Among many pearls of wisdom, I will never forget that he said an up bow shouldn’t be weaker than a down bow and vice versa. One should be able to do whatever one wants without their technique limiting them. The same goes for tonguing: the K doesn’t need to be weaker or heavier- it should just be another feather to your bow.  Use it interchangeably with a T/D consonant.

Now try this exercise, using any note you like.  The aim is to back and forth between an articulated note and a note that doesn’t use the tongue, but always with a good full sound:

This is how I suggest practising Voliere from Carnival of Animals in my book, combining it with harmonics. Harmonics are your best teacher because any changes in airstream will cause cracks and incorrect pitches. Afterwards, when you play with normal fingerings, you will find it much easier!  Have a look below at an exercise from my book.

Anatomy of the tongue (MRI)

To become more familiar with how the tongue works, take a look at some MRI videos of the movement of the tongue, like the one below.  Notice how large the tongue is and how we use just a small part of it to articulate sounds.  Just as with any muscle (although the tongue is a muscular organ), the tongue can be trained with good practice technique.

Where is the tongue when you say each consonant? See below.

For consistency of sound, I think the vowel is also important, e.g. ta, te, tu, to, ti.  Be sure to keep your vowel sound constant throughout an articulated passage, trying not to change between different vowels, which will affect the colour of the sound.

The tongue can also be placed outside the lips like we do for words beginning with “th”, but we can still make a clear “t” without any hissing h sounds. Consonants like “t” are actually very flexible regarding tongue placement.  Most will find T behind the teeth easiest, but some will find articulated in front of the teeth easier.   Become familiar with using both.

To get used to feeling the tongue behind the teeth, try saying “Nnn”.
Then follow that with the consonant, “ta” or “da”.  Nnnn da.  Let the “da” release without any tension.  Think of the words “London”  Or “undone”

Here is part of an exercise from my book for practising the different attacks/strokes of the tongue:

Once the sound is clear on all these consonants, tonguing becomes much easier. Articulation is primarily about how the air is released. The tongue is supplemental/supportive in creating clear sounds. Don’t let the tongue become an obstacle for the air.  As my teacher Lorna McGhee says, “The airstream is the King!  Make way for the King!”

Thanks for reading and happy fluting!