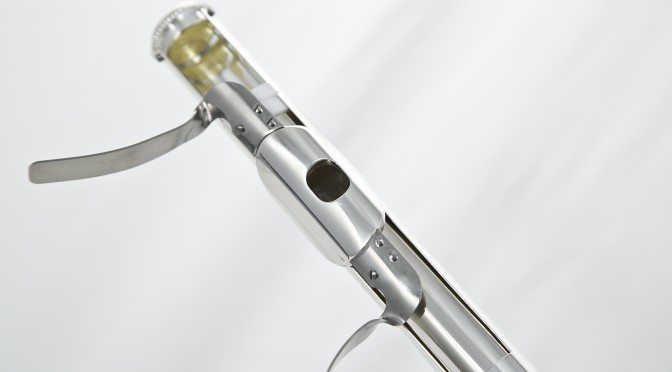 Robert Dick is an internationally renowned American flautist and composer nicknamed ‘the Hendrix of the flute’ due to his ability to create effects similar to electric guitar and push the boundaries of conventional flute playing. He was inspired by Hendrix’s creativity from a very young age and desired to match the sound and abilities of electric guitar on flute.

“I heard sounds that had never existed before…and that’s where I connected mostly with Jimmy… The Stratocaster had a whammy bar so I set out to create a whammy bar for flute.”

After working in collaboration with Bickford Brannen of Brannen Brothers, Eva Kingma and Kaspar Baechi, Robert Dick made his dream a reality and created the ‘whammy bar’ Glissando Headjoint®. At first glance the Glissando Headjoint® may look like a novelty piece of kit, but think again. This headjoint has the potential to completely revolutionise the flute we are all so accustomed to.

Robert Dick describes the design as “a telescoping headjoint, with a high performance contemporary cut headjoint sliding inside a carrier tube! Two ‘wings’ extend from the lip plate and comfortably embrace the flutist’s cheeks.” It can be used to perform in the same way as a traditional Boehm flute when in its “home position” (all the way in) and clearly a great deal of thought has gone into the sound. Throughout the registers you can achieve a rich and full sound which you would expect from a high quality handmade headjoint, but this headjoint does so much more than just that. By moving the lip plate to the left you extend the length of the flute and it is also possible to make a downward glissando from every note… genius!

The Glissando Headjoint® adds another sound dimension to the flute and allows you to keep the tone quality on bends which can be lost with exposed open hole fingerings. Robert Dick foresees this headjoint being used by every jazz, rock, world music and contemporary flautist in the future and there is no doubt that it creates endless new possibilities for the modern flautist.

The Glissando Headjoint® is now made by the Eastman Musical Instrument Company (the parent company of Haynes).

Publications by Robert Dick for flute are available from Just Flutes